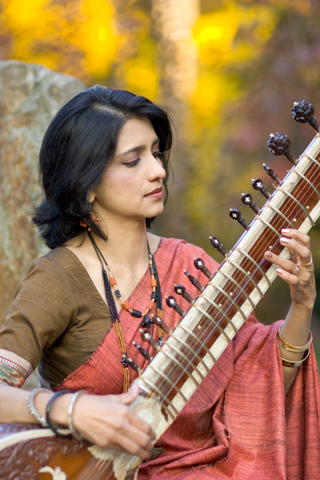 Today, we look at a different type of artist. And I say different, not to diminish the value of musicians, but to distinguish that normally my blog is about visual arts; not audio arts.

What makes this post even more special is that I share with you the sounds of a unique instrument.

The first time I ever saw a sitar was on March 27th in Hodson Auditorium. Alif Laila extemporaneously shared with Hood College her free spirited sitar playing gift.

The auditorium stage was adorned with a Persian rug, ornate pillows, a short mic and of course the instruments; a sitar and drum. Now let me tell you about that sitar, it was like a guitar on steroids. How could anyone’s finger span far enough and skirt fast enough across that instruments massive neck to play smooth strains. Not even Shaq has the appropriate hand size to play a sitar. When Alif Laila first grabbed and craddled the sitar she looked like she struggled with the weight.

All I expected was Alif Laila and a sitar, but she was accompanied by a drummer. The musicians sat on the rug pretzel style, gave their introductory statement, and just started playing.

What I heard was culturally enriching music. I had once gone to my friend’s Arangetram, an Indian dance graduation recital, so I have heard the zings of the sitar and the whubbas of the tabla drum before. However, that time the beats came from a tape, the recorded artist sang exotic lyrics and I was more concentrated on the fluid combination of what I can only describe as Yoga like moves and gestures. In comparison the Arangetram’s music was lively, adventurous and mercurial. And the songs strum by Laila were relaxing and temperate.

I kind of wanted to steal the pillows from the stage and wrap myself with the rug. I’m not implying that the hum of the sitar putting me to sleep was a bad thing. Instead, I would say that Laila accomplished her goal of transmitting an ethereal calming spirituality through music.

However, with my two sitar experiences being so different, I was a little confused on what I was suppose to feel or what really was the standard for sitar music.

What did you think about the sitar player?

Sakib: “I thought that the sitar player was very well trained in classical indian music and was very fluent in sitar playing. What makes her interesting was she was not only a good player but was experienced in the spiritual teachings that come with it, which she tried her best to convey in her little speeches throughout the show.”

Have you heard a sitar player before and if so what makes you want to listen them?

Sakib:“I have listened to Maestro Ravi Shankar countless times before. What draws me to Sitar music is the capacity of its sound to penetrate through all thoughts and distractions in the mind- if we let it.”

And how would you describe the type of sound a sitar makes and how did the music make you feel?

Sakib: “I would describe the sound of the sitar as vibratory and sharp, which is what i think gives it the ability to pierce through the dense cloud of thought that we all live under all the time. Perhaps this is why Sitar music makes me feel very relaxed and at ease.”

Don’t just read this post. Why not hear, reveal, experience the sitar and Alif Laila’s melody for yourself.

Listen to a snip it of what Sakib and I heard.